It it important to understand that horses are a prey species.  When threatened or alarmed prey species exhibit two distinct behaviour types. Some (such as cattle and sheep) will bunch together for safety. Others (such as horses or deer) will take flight from danger.

Flight animals are much more nervous and will startle more easily than a prey animal that bunches together. If a flight animal is unable to escape a danger or perceived predator it will stand at bay, and fight using hooves and teeth to strike.

Typically a horse relies on sight to give early warning of an approaching danger. Several things may spark a flight reaction in a horse. These include: sudden movements, loud unexpected noises, unfamiliar sights (e.g. a piece of paper blowing in the wind, a door or gate slamming shut). This is commonly referred to as being spooked. A spooked horse may bolt (flight) rear (fight) shy or lash out. Horses are often more difficult to control when it is windy. Even familiar objects can rattle, blow or move in the wind. These unfamiliar sudden movements can trigger a natural fear reaction in horses. Fear leads to fight or flight.

In their natural environment horses usually live in small groups (herds). A mature male (stallion) may live in a harem with about four to six mares. He will be expected to fight to defend his territory and his mares. Other males, too young, too old, or otherwise unable to keep several mares with them, live in bachelor groups.

It was long thought that it was the stallion that led the herds, but more recent observations have suggested that the herd leader is usually an older mare. A mare becomes a leader of a herd by virtue of her experience and problem-solving abilities. She will know where best to find water and food, where best to shelter, how to cross rivers and other natural obstacles and how to avoid danger. Her role is not one of dominance but of leadership. The stallion, because of his defensive role, exhibits far more dominant behaviours. These can include aggression, fighting, raucous vocalisation, dominant body language, kicking, biting, sexualised display, patrolling his territory, etc. In the domesticated environments of today stallions rarely have opportunity to enjoy a herd life. This can lead to behaviour problems.

The domesticated horse lacks a natural leadership figure, and thus will always look to its handler for guidance. This is the basis of the trust relationship between horse and handler. Therefore is it essential for the rider or handler to exhibit a confident and self assured manner. A nervous, inexperienced or clumsy handler will make a horse nervous or irritated.

Horses do not need to group together in large numbers protect to themselves, because their natural instinct is to flee from danger. Horses are highly sociable animals, and a horse which is housed alone feels abandoned, lonely and vulnerable. For this reason horses are extremely unhappy if they are kept in isolation.

This is another reason for the bond between a horse and its handler … the handler takes the place of a  fellow herd member.

A ‘lead’ horse usually demonstrates quite subtle behaviours. A lead horse may move or direct others quietly and efficiently, without the histrionics associated with  dominant  behaviour. Handlers can learn from this, in that calm, authorative body language is essential  in handling horses safely and gaining respect.

The other vital sense for horses is their sense of smell. This is extremely acute, and can be used to warn of danger at close range. For this reason a horse can become unsettled or nervous as a result of scenting something it finds unsettling (i.e. smoke, mares in season, a stallion). It is this sense of smell that is often manipulated by handlers to control horses. Most experienced handlers will acknowledge that horses react strongly to certain odours. Ginger, peppermint, linseed, fenugreek and aniseed are substances which many horses find extremely attractive. Other fragrances may be used to calm and reassure a nervous animal: camomile and lavender are just two examples. The familiar scent of a trusted handler is often enough to relax a horse.

Today there are a wealth of preparations available to buy which advertisers claim will calm your horse or cure unwanted behaviours.

These are all scent based.

3.  a horse’s acute scent of smell

are key to successful horse management. 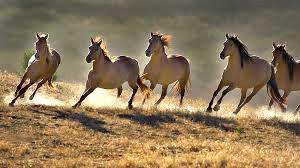