Since man first domesticated the horse and harnessed it for his use, and throughout this long relationship the battle for mastery over horses has been waged. A horse is bigger, faster, stronger than a man. How then to gain control over  them?

Since humans could never conquer the horse by strength alone, they have always sought other ways to control them.

Men skilled in the breaking, training and management of horses were viewed with great respect and even awe by their contemporaries. Indeed some came to earn themselves reputations as horse wizards or ‘whisperers’. Many of their techniques are well-known to any experienced horse keeper. But to the uninitiated it must have seemed that these horse experts possessed mystical (or even supernatural) skills.

Other skills, the ability to stop, start, calm, cure or even kill a horse at will, would have suggested magical powers of a deeper, darker kind. Suspicions arose that these super-skilled horsemen resorted to the arts of sorcery and witchcraft.

Traditional folk medicine and practice abounded in Britain for many centuries, and every hamlet had its ‘wise woman’ or ‘cunning man’, herbalists and folk doctors. During the 17th century, the rise of witch-hunting hysteria drove many of these practices underground. Many of those who demonstrated unusual skills or knowledge were denounced as witches. And skilful horse handlers were not immune from charges of sorcery. This climate of hysteria induced a need for secrecy. It is no surprise then that horse-tamers became rather secretive about their methods, and often chose to conduct their work out of sight of prying eyes. So, we have mysticism, secrecy and superstition - all the ingredients for the creation of a myth.

Once the era of witch hunting had dwindled away, with the coming of the Age of Enlightenment, those who possessed special skills felt able to step out of the shadows once more, and a generation of showman practitioners emerged.

The rise of the 'showmen'

Fortune-tellers, mystics, quack doctors and conjurors once again toured the great fairs and markets in cities and towns. Their aura of mystery remained. But now the crowds flocked to admire their artistry, and with the crowds, came riches.As the age of Enlightenment gave way to the Industrial era, the credulous public seemed ever more willing to surrender their common sense (and their purses) in pursuit of the miraculous, the mystical and the bizarre. In the nineteenth century crowds flocked to witness novel wonders of every kind … from séances to scientific wonders. It was in many ways the golden age of charlatans and hucksters, and magicians and mountebanks abounded.

In the eighteenth and nineteenth centuries we see the emergence of the great travelling showman horse tamers. One such was Irishman Dan Sullivan. Dan would take a vicious or unmanageable horse and, by whispering a few words into its ear, make it docile and well-behaved. According to Dan proclaimed that he had learned this secret from a mystic in India where he had served in the army. The man imparted his secret to Dan for the price of a meal, and the mystical 'Whisperer' was on his way.  There was obviously more involved in Dan’s method, than just whispering a few words. Dan's method was to remove the horse to a secluded barn or shed. The horse would emerge shortly afterwards, both subdued and in a state of terror. What actually happened during these encounters we cannot know. Because Dan's lips remained sealed.

This all added to the Showman’s spiel, but Dan’s methods would have been more impressive if the horses he worked his magic on had remained docile and manageable. Sadly, this was not the case. Once Dan had left, the horse would revert to its previous unruly behaviour.  Some said that Sullivan's method (whatever it was) must have involved some kind of cruelty. Others complained that he damaged the reputation of genuine horse tamers who worked hard to subdue difficult horses and correct their behaviour permanently.  Whatever he was … showman or charlatan,

Dan Sullivan was the horse tamer for whom the term 'horse whisperer' was first coined.

Sample arrived in London in 1885 with a machine which he claimed could tame three or four wild horses an hour. The machine consisted of a platform on to which a horse would be loaded and secured. The platform would then be whirled round at terrific speed by a steam engine until the poor horse was rendered dizzy. Unfortunately for the self-styled ‘professor’ (but luckily for the horse population) the machine was a dismal flop. Otherwise people might still be spinning horses to this day!

Even if the ludicrous Sample failed to impress, one of his pupils made a significant contribution to our knowledge of horses. Sydney Osborne (better known as Professor Galvayne) invented a foolproof system of telling a horse's age by its teeth.

Even away from the show ring it seems horses were not safe from the wilder notions of the professional horse tamer.  The following excerpt is from a nineteenth century manual, The Horsekeeper's Handbook of Tips and Wrinkles. This bizarre tip is titled ‘How to Handle a Savage, Vicious Horse’.

Approach the horse firmly, fixing your gaze upon his eye. Have in your hand a six-chambered revolver, loaded with blank cartridges. The moment he attempts to savage you, fire. (Not point blank at him), but directly in front of his face. This will give the horse a sudden shock and take his attention. If he is in a stall this is your opportunity. Before he has time to recover himself, rush in and seize him by the halter, and again discharge the revolver close alongside his face, saying: 'What do you mean?' 'How dare you!' (Presumably in a commanding tone.)

So do we believe that ‘whispering’ and other mystical techniques have a place in present-day horse keeping?  A trawl of the internet might suggest so. You can find a host of ‘alternative’ horse therapists on-line. An infinite variety of potions, sprays, and supplements are available which promise to calm your horse, make it go faster, slower, more obedient or just make it feel happy. There are training techniques, medicines and remedies galore. Some are derived from Native American practices, others are full of highly scientific claims. You can find equine aromatherapists, reiku, homeopathy and chiropractitioners. There are even clairvoyant, telepathic and psychic horse-tamers who claim to be able to read your horse’s mind. In addition, the travelling horse tamer has made a come-back … on a global scale. Horse whisperers and tamers are once again touring the world and filling large venues with highly lucrative performances, seminars, clinics and public demonstrations.

As the golden age of the working horse passed into history, the old style whisperers, with their lucky charms, potions, and ‘secret words’ also faded into the twilight. Nevertheless, their methods and their mythology still have the power to fascinate us. They deserve to be preserved and examined once more. 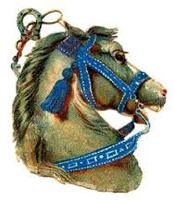 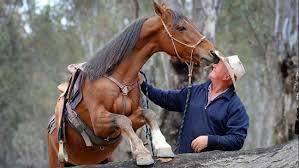